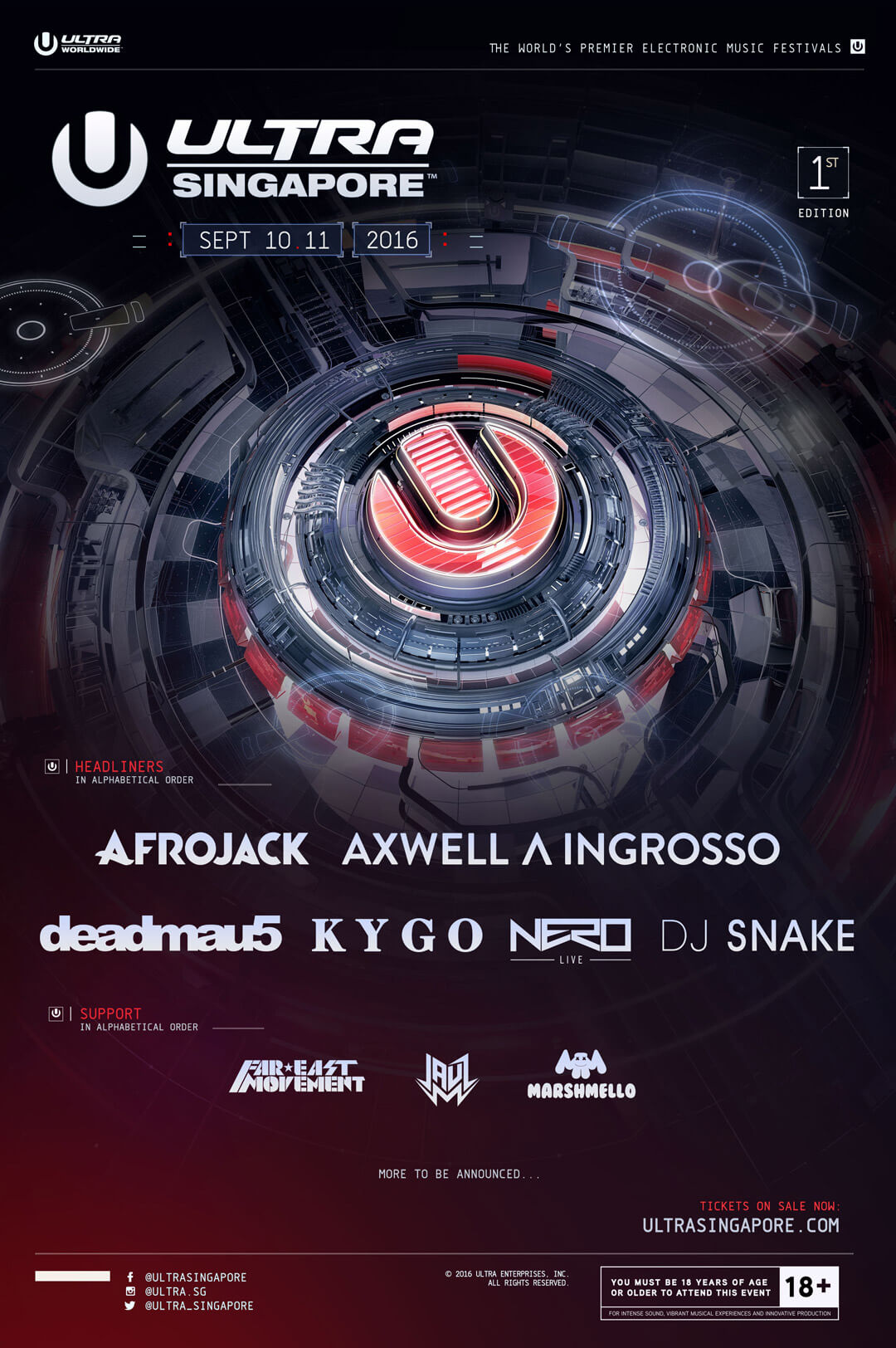 Having more than proved its worth with the initial Road To Ultra event in 2015, the world’s premier, award winning and most successful independent music festival brand is expanding its presence in Singapore in September 2016, to a full scale two-day festival experience.

The upgraded event is stacked with Phase One headliners Afrojack, Axwell^Ingrosso, deadmau5, Kygo, DJ Snake and Nero Live, and will form the THIRD major ULTRA festival in Asia alongside ULTRA Korea, which wrapped its 5th year in June 2016, and the upcoming third edition of ULTRA Japan, also in September.

Canadian luminary deadmau5, who is currently mid way through his ULTRA Worldwide 2016 global tour, will have completed a colossal five ULTRA dates this year after his appearance in Singapore. The mau5 sent fans into a frenzy in March this year, throwing down a staggering three unique sets at Ultra Music Festival in Miami. Kygo – the crowned king of a billion Spotify streams – will make his debut at ULTRA Singapore on his very own birthday weekend, bringing his unique and versatile style to the main stage. Scandinavian stalwarts Axwell^Ingrosso will fly the flag for Sweden, British three-piece live electronic band NERO will rep the UK, while everyone’s favorite producer DJ Snake does the same for France. Ticketholders can expect nothing but colossal performances from these main stage masterminds, as the combination of top-notch talent with ULTRA’s unmatched festival production will render fans breathless.

Completing the Phase One lineup, the mysterious masked producer / DJ Marshmello, and Bass House pioneer, JAUZ. This array of top-notch talent will be performing at the stunning new ULTRA Park venue across the weekend, set on Singapore’s very own ‘Bayfront Avenue’. A spitting image of Miami’s Bayfront Park location, and situated right across the Marina Bay Sands Hotel, ULTRA Singapore will be the first event of its kind held at this sensational outdoor venue. The gorgeous new space will not only provide spectacular views of the downtown skyline, but also impeccable vistas of the world famous Marina Bay. Drawing further parallels to Miami, ULTRA Singapore will receive the full treatment, bringing festivalgoers the inimitable MAIN STAGE, ULTRA’s Live Stage, and of course the RESISTANCE concept featuring techno, deep house and the darker side of dance music, whose popularity is a juggernaut in itself. This weekend is set to capture the minds and imagination of the nation, as ULTRA delivers its critically acclaimed experience.

ULTRA Singapore marks the start of ULTRA Worldwide’s second Asia run this year, with the highly successful ULTRA Korea festival and the sold out Road To Ultra Thailand event having already taken place in June. Part two will see the brand undertake six stops including Singapore, Taiwan, Japan, Hong Kong, Bali and the Philippines all within a two-week span – a festival first and a feat no other event organizer can lay claim to.

For more information about tickets and lineups for all Ultra Worldwide events, stay tuned to ultrasingapore.com and umfworldwide.com

The ULTRA brand was founded in 1997 by Executive Producer, President & CEO Russell Faibisch, and began producing electronic music events in South Florida, which led to the inaugural Ultra Music Festival in 1999 on the sands of Miami Beach.

The internationally renowned festival, which has taken place every March since its inception, celebrated its eighteenth anniversary from March 18-20, 2016 by bringing over 165,000 music enthusiasts to the sold out waterfront event in the heart of the City of Miami. Ultra Music Festival returns to Bayfront Park for its nineteenth annual edition, 24-26 March 2017.

Choosing to follow a unique, creative vision and a wholly organic growth focused around a true love for music, artists and fans alike, the ULTRA and ULTRA Worldwide™ brands represent not only the world’s biggest and most successful remaining INDEPENDENT electronic music festival brand, they are now the most international of any festival brand in the world by far. The event organizers continue to transport the unrivalled experience from the Miami flagship festival to an ever-growing number of destinations and fans all over the globe.

Over the past eighteen years, literally thousands of the world’s most iconic DJs, producers and live acts have mesmerized audiences with awe-inspiring sets at ULTRA festivals in ARGENTINA, BALI, BRAZIL, CHILE, CROATIA, IBIZA, JAPAN, KOREA, SOUTH AFRICA and of course MIAMI, as well as ROAD TO ULTRA® events in BOLIVIA, CHILE, COLOMBIA, MACAU, PARAGUAY, PERU, THE PHILIPPINES, PUERTO RICO, SEOUL, SINGAPORE, TAIWAN, THAILAND, TOKYO and the USA. Each and every new global edition is founded on the same successful recipe that has been perfected over eighteen years in Miami, combining the most diverse electronic talent with the most technologically advanced, large-scale festival productions in the world.

In addition, the ULTRA brands pioneered the live stream experience, ‘ULTRA LIVE’ (whereby the festival is brought online to over 20 million unique viewers globally) and the audio broadcasting platform ‘UMF RADIO’ (syndicated to FM Radio in over 62 countries and reaching more than 22 million listeners weekly). Also UMF FILMS’ collaboration with FINAL KID has seen some of the most visually breathtaking festival aftermovies in the music space, including a feature-length documentary exploring the explosion of dance music, entitled CAN U FEEL IT, which premiered at the Ultra Music Festival, Miami 2012 and was exhibited in over 500 theaters across the Unites States.

2016 will see the ULTRA and ULTRA WORLDWIDE™ brands continue to push the boundaries even further, bringing an unparalleled combination of cutting edge productions and the world’s best electronic acts back to previous strongholds and new frontiers across the globe. With a brand new edition of ULTRA Brasil confirmed to take place in Rio de Janeiro on 14-15 October 2016, ULTRA Singapore becoming a full scale two-day festival on 9-10 September and with ROAD TO ULTRA® entering Hong Kong later this year, the ULTRA brand has now united TWENTY COUNTRIES across FIVE CONTINENTS worldwide. For full details on all ULTRA Worldwide events, go to umfworldwide.com